Let's have a chat about how you can help make lasting change in your community.

We’re a friendly bunch of professionals and would welcome you to our meetings. Just send a request and all the details will be sent to you.

We’d be happy to have you.

We're also happy if you just want to get involved in a particular project, or suggest a project for us to look at.

Here we have a wonderful example of a long standing Rotary Club of Manly Christmas tradition.

41 Christmases ago, David Brown, Rotary Club of Manly past president and Community Service Director, along with two other Manly Rotarian Committee members; Marcus Blackmore and the Blackmores Factory Manager, Allen Oliver, suggested a project to give a Christmas Hamper to the needy via the local charities. The Rotary Club of Manly's President at the time was David Park, who approved the project.

In the first 20 years, Blackmores provided the space for Manly Rotarians to pack the hampers and store them on pallets until the following Monday at Blackmores Balgowlah, when there were collected by the Manly Rotary nominated charities. Blackmores paid for the hamper items and Rotary Club of Manly did the purchasing. It was initially 200 hampers.

For the second 21 years, after Blackmores moved to Warriewood, the Blackmores name was added as a co-sponsor of the project. Hamper totals were increased to 300 and the local Rotary club, Mona Vale, was invited to provide half the packing volunteers.

For the first 10 years at the Warriewood Campus, Marcus’s Executive Assistant and David Brown jointly did the ordering of the hamper items. She retired and the Corporate Affairs Manager, Amanda Judge took over the complete ordering of the Hamper items, with Blackmores Trust paying for the items, leaving David free to organise the Rotary packing volunteers and select and liaise with the distributing charities on behalf of Manly Rotary, as he has since the project started.

Hamper total was increased to 400. 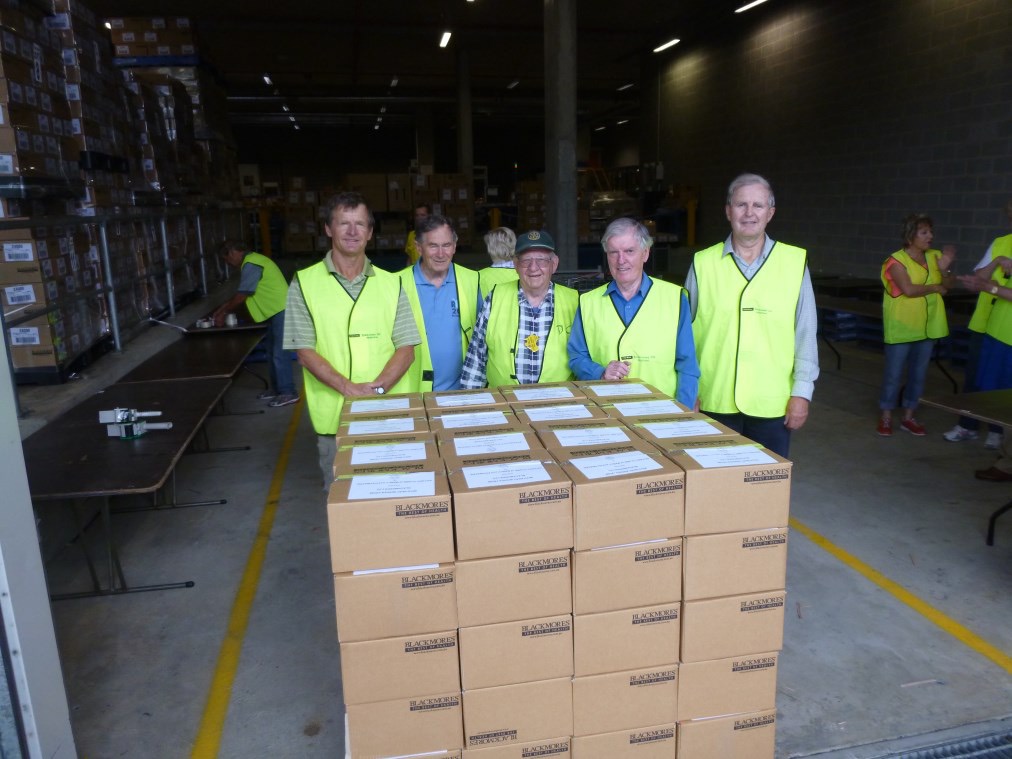 In 2020, NSW health regulations stopped volunteers working within the Blackmores Manufacturing Factory complex at Warriewood due to Covid 19. As it was our 40th Anniversary, Marcus, Blackmores and David (on behalf of Manly Rotary) wanted the 2020 Christmas hamper project to happen.

Blackmores contacted the Sunnyfield Association to sub-contract hamper packing. David then advised the 16 charity recipients to pick up the 400 hampers from Sunnyfield. He had to arrange different loading times to fit in with Sunnyfield’s own warehouse arrival and despatch programme. He spent a day being on hand to co-ordinate the hamper collections. In addition to this, Blackmores asked if he would spend time at Sunnyfield to assist in training the Sunnyfield workers on how to pack the hampers correctly.

The 2020 Manly Rotary/Blackmores Christmas hampers was welcomed by the needy in the middle of COVID.

The NSW health regulations are still in place for Christmas 2021, stopping the use of Rotary volunteer packers at Warriewood. Blackmores have a newly established Distribution centre at Eastern Creek which does not manufacture and is not subject to the same NSW Health regulations. Both Raff, the Blackmores Corporate Affairs Director, and David, on behalf of Manly Rotary, were keen to continue the 41st year of Christmas Hampers, with Covid still affecting needy families.

It was decided to arrange for packing to take place at the Distribution Centre with Blackmores covering the extra costs of a courier. It was David's job to arrange with the charities to be able to receive their hamper allocation at set times; co-ordinate packing on pallets in delivery order at the Distribution Centre and map out a delivery routing involving Allambie Heights, Frenchs Forest, Dee Why, Brookvale, Manly Vale and Manly with the courier.

The driver rang all the recipients with an approx. delivery time and again on approach.

Everything went according to plan. The truck was loaded at Eastern Creek from 7 am with the first deliveries in Manly after 9 am and last delivery at Allambie Heights at 2.15 pm.

If Covid health regulations allow it, Manly Rotary and UNB Rotary volunteers will be packing again at Blackmore’s Warriewood for the Rotary Club of Manly’s 42nd year.

As an added bonus in 2021, a new Manly Rotarian, Kenton Farrow, had a conversation with KLS Martin Australia, who wanted to make a Festive contribution to those most vulnerable in our community and who have endured a very difficult year.

As a seperate project, KLS Martin were also planning on doing so by distributing Christmas Hampers to the most needy in our society!

The Rotary Club of Manly took KLS Martin's budget of 30 Hampers and with the leverage and support of our Partners, Providers and Member contributions expanded to over 57 more Hampers!

Volunteers helped with the packaging and distribution at one of the Manly Rotarian's homes.

The Beneficiaries of these Hampers included:

“On behalf of Lifeline Northern Beaches, we would like to express our sincere thanks for your donation of Christmas Hampers, which you delivered this week.

Our clients who will receive these hampers, are very much in need, and I am sure will be grateful for the help, at this time of year.

It is heartening to have organisations like Rotary Club of Manly to assist us with helping our clients. Thank you for your ongoing support."

Made possible with thanks to...

Get involved in helping the community ﻿with projects like this one, all year round!

By submitting the form you agree to our Terms.

"The Rotary Manly Fun Run & Walk is a community event that I have enjoyed as a participant for a number of years. I wanted to give back and so I joined the Rotary Club to be part of the team making this great community event happen. (We have a fabulous vision for the future of this run!) I enjoy that as a Club we focus on raising funds for our local community but we also support excellent international projects as well.

Get involved - You’ll be glad you did!"

"Finding local young people for Rotary sponsored scholarships is both fun and rewarding. It is an investment in the future of Manly. And doing it as a team makes it even better."

"I originally joined Rotary out of a sense of giving back to the community after volunteering for many years in my kids activities. Now I appreciate a degree of community and friendship with the friends I have made through an active involvement with Rotary."

"Four years ago I felt the need to offer something to the community and people who needed support. I was so warmly welcomed by Manly Rotary Club members that I decided to join immediately. Since that time I have have been involved in numerous projects to help our community and travelled to Kenya as a volunteer at an Orphanage that had been founded by a lady school teacher Rotarian in Queensland. What a great experience it has been over the last four years! "

Chat to us about how you want to help your community...